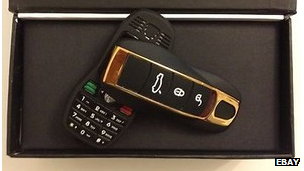 These strange looking mobile phones have started emerging in the UK market, disguised as car key fobs. Officials are already considering banning them, but who would want to buy one anyway?

Marketed as “the world’s smallest mobiles”, the devices are available from mainstream shopping channels such as Amazon and eBay and feature logos from brands including BMW, Volkswagen, Bentley, Audi and Porsche. It’s doubtful that the manufacturers have given permission for this though.

You might think it’s a lot of effort to go through to try and get away with speaking on the phone whilst driving, have these people not heard of hands free sets?? Well apparently the ‘phone fobs’ have been advertised with prisoners in mind, as having a mobile phone in jail is an offense.

The product description of one device sold via Amazon states that it features “very very very low metal contact badges [which] can be removed due to metal content alarm”, while another says the fob is “easily concealable”. 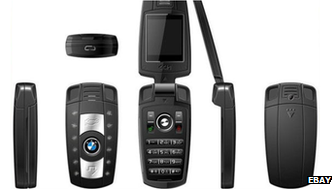 More than 7,000 phones and Sim cards were confiscated in prisons in England and Wales last year. The latest key fob mobile phone has the potential to increase the number of mobiles in prisons simply by the nature of the design and size.

The government is discussing the issue with the National Trading Standards Board and the Serious Organised Crime Agency, and the NTSB has asked retailers to stop selling the ‘phone fobs’. The POA – a prison officer’s trade union has warned that prisoners found in possession of a mobile phone should be prosecuted.